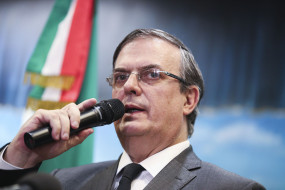 Ebrard made the remarks on Friday in response to complaints from the US and Canada that Mexico was violating the US-Mexico-Canada Agreement (USMCA), Xinhua news agency reported.

Ebrard said the State Department and the Economy Ministry would coordinate Mexico’s response to the US and Canada’s objections to the government’s new energy policy, which he claims goes against the terms of the free trade agreement.

He added, Mexico will present its arguments to defend the country’s sovereignty and self-determination, as no treaty can be better than that.

At the same time, he also said, Mexico has all kinds of international treaties, and treaties are binding, but I do not see any decision to date that has been made contrary to the content of the free trade agreement.

The governments of the US and Canada say Mexico is using discriminatory practices in the energy sector that harm international companies and cross-border distribution.

Within the framework of the USMCA, the parties have 75 days to resolve the dispute. “I’m optimistic, I’m not saying it’s going to be easy, but we’re going to move forward with determination and persistence,” Ebrard said.

Rishi Sunak of Indian origin lags behind in the race for the post of British PM, shocking information found in the survey