Flop side heroine of Bengali films, became the villain for Mamta Banerjee’s party, meeting with Partha Chatterjee started growing like this 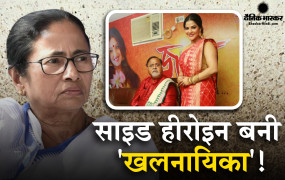 Digital Desk, Kolkata. The heat of West Bengal’s famous teacher recruitment scam is now seen reaching the state government. Yesterday (Friday) the ED team raided the house of Arpita Mukherjee, who is said to be close to Mamta Banerjee’s special minister Partha Chatterjee. In which about 20 crores in cash has been recovered. The house of Minister Partha Chatterjee was also raided on Friday itself and is still going on. According to central investigative agencies, the role of Arpita Mukherjee in the teacher recruitment scam is in doubt. Meanwhile, questions are being raised that who is Arpita Mukherjee.

Who is Arpita Mukherjee?

After the huge amount found at Arpita Mukherjee’s house, the way BJP is attacking CM Mamta Banerjee’s party TMC, it seems that if Arpita’s teacher is found to be connected with recruitment examination, then she may prove to be a villain for TMC. can.

The real Shiv Sena’s fight reached the Election Commission, Uddhav Thackeray or Eknath Shinde, who has the upper hand?