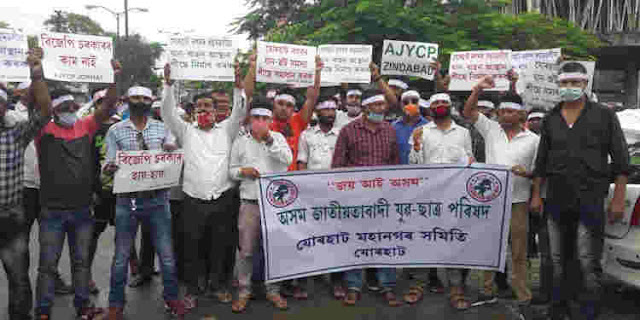 Unit Jorhat Assam City Jatiyatabadi Yuva Chatra Parishad (AJYCP) on Tuesday held a demonstration to protest the inability of the administration of the district to solve daily traffic chaos in the city of Jorhat. Members of the student body of the young, carrying banners and shouting slogans, they demanded that the multi-storey parking for 150 semi-built vehicles completed as soon as possible.

Alleging massive corruption, AJYCP in a memorandum to the Prime Minister of Assam sarbananda sonowal he said that the construction of the multistory parking began with much fanfare in October 2013 by the Municipal Board of Jorhat.

“They have spent seven years and not known why work only 30% has been made, while 60% of the total amount, which is Rs 10.51 crore, has been transmitted to the contractor,” the organization indicated in the statement.

They also demanded that an investigation be ordered in the matter and the project will be completed in order to ease traffic jams in the city. The parking facility will also have multi-storey shops in large rooms on the top floor and ground floor.