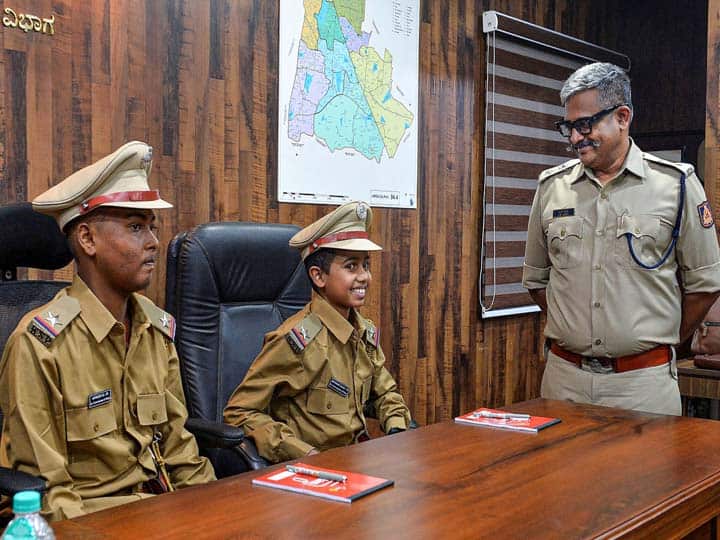 Bengaluru News: The Make-A-Wish Foundation in Bangalore made the dream of two high school students come true and both became IPS officers for a day. Seeing the happiness on the faces of both of them wearing police uniforms, the whole police station looked happy. Actually, it was a part of the initiative of Make a Wish Foundation to fulfill the wishes of those two students and see the smile on their faces. Both the students are currently studying in high school in Bangalore and are cancer patients. Both are undergoing treatment.

Yesterday was a special day at the office of the Deputy Commissioner of Police, South-East Division. It was a special Thursday, when Mithilesh and Mohammed Salman Khan, 13, came into the office in police uniform and took a salute from the police staff after an introduction.

DCP, South-East Division, C.K. Baba said that both the children went to the office and sat there for some time before taking information about the developments in the area from the officials. He told that this program was part of Make-A-Wish Foundation’s initiative to fulfill the wishes of two boys who are studying in high school in Bengaluru and are undergoing treatment for cancer.

DCP told – the wish of both the boys was fulfilled

The DCP said that as part of the initiative, the wishes of both the boys were fulfilled. Both the boys who wanted to become IPS officers took up the role of DCP of South-East Division in Koramangala office.” As part of the program Salman and Mithilesh got to know about the activities and exercises and even the DCP’s. As part of routine work they also went to the police station and the staff at the station presented a case of domestic violence to them and both the boys after hearing the complaint issued necessary instructions.

Boys told why they want to become IPS

Where Salman shared the reason behind his dream of becoming a police officer and told that it is a noble profession that can provide solace to many people in distress. Mithilesh said that he is more interested in traffic management and road discipline.

Both the boys had lunch with the police personnel and were later given gifts as mementos by the police officers. DCP, South-East Division, C.K. Baba said, “It was a great feeling to make the dream of both the kids come true and be a part of it. Both are battling cancer and the smile on their faces is a big deal.”

44 in 10th and 65% in 12th passed, IAS officer Avnish Sharan motivated the students by showing the marksheet

Monsoon Session: Will it be mandatory for the youth to join the army? Government gave this answer in Parliament

10 lakh reward on Khalistan Tiger Force chief Hardeep Singh Nijjar, search is on in this case

10 lakh reward on Khalistan Tiger Force chief Hardeep Singh Nijjar, search is on in this case