The country got the first female tribal president in the form of Draupadi Murmu, defeated Yashwant Sinha by a huge margin, got strong support in South India too 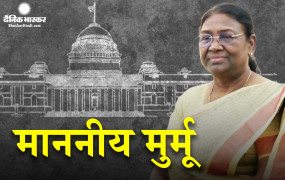 Digital Desk, New Delhi. After the day-long counting of votes, the name of the 15th President of the country has been officially announced. As it seemed, the victory of Draupadi Murmu was already decided. He has won by a huge margin of votes. After which she has become the first tribal president of the country. NDA candidate Draupadi Murmu got 2824 votes with a value of 676803 while opposition candidate Yashwant Sinha got I877 votes with a value of 380177. NDA candidate Draupadi Murmu got 64 percent votes in the presidential election. The opposition candidate Yashwant Sinha got 36 per cent of the votes.

Celebrations started even before the victory

Celebrations had started in Odisha even before Murmu’s victory was declared. There is no place for enthusiasm among the people of the district, especially in Mayurbhanj. 50 quintal laddus are being made here. It is reported from the sources that after the official announcement, Prime Minister Narendra Modi can go to Draupadi Murmu’s house.

Today the country will get a new President. Counting of votes will start from 11 am. The ballot boxes reached the Parliament House on Tuesday evening itself, amidst tight security, the ballot boxes have been kept in the strong room. Earlier on Monday, voting for the presidential election was held.

First the votes of the MPs will be counted. After that the votes cast by the MLAs in the ten state Legislative Assemblies will be counted in alphabetical order. Counting officers arrive to count the votes. The counting will take place in the same room of the Parliament House where the MPs cast their votes.

The counting officers will give the information after the votes of 20 states are counted. This sequence will be repeated again, and in the end the results of defeat will be announced. Votes were cast by ballot papers. The voting percentage in Parliament House was 99.18. At the same time, 100 percent voting was done in ten states and one union territory of the country. While cross voting was reported in many states.

Sonia Gandhi will be presented in front of ED today, know what has happened so far in this case

The rain caused havoc on the mountains, life disturbed from Jammu and Kashmir to Uttarakhand

The rain caused havoc on the mountains, life disturbed from Jammu and Kashmir to Uttarakhand