Rishi Sunak of Indian origin lags behind in the race for the post of British PM, shocking information found in the survey 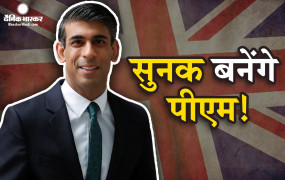 Digital Desk, New Delhi. Indian-origin Rishi Sunak, who has been leading the race to become the Prime Minister of Britain, is now seen to be lagging behind in a survey. Let us tell you that in the ‘YouGov’ survey, UK Foreign Secretary Liz Truss has overtaken Sunak in the race for the post of PM. In the poll, Liz got 28 more votes than Sunak. Earlier on Thursday, members of the Conservative Party voted to send him to the last step of becoming prime minister.

According to Sky News, among men and women and among those who voted for Brexit, in each age group, Truss has received more votes than Sunak. According to the survey, Sunak has defeated Truss in the only category of voters in 2016.

It has been told in the survey that now one of these two will be chosen by the party members in the voting which will run from August 4 to early September. According to the information, the survey organization YouGov is a leading British international Internet-based market research and data analytics firm. The survey said that the truss has maintained its lead. Sunak, however, is ahead of Truss in parliamentary votes. Boris Johnson came under pressure only after Indian-origin Rishi Sunak resigned from the Finance Minister and had to leave the post of PM.

The survey was polled by 730 Conservative Party members, 62 per cent of whom said they would vote for Truss as the next British PM after Boris Johnson. At the same time, 38 percent of the members will choose Rishi Sunak of Indian origin. These do not include those who said they would not vote or did not know. Truss has gained 24 percentage point points, which is higher than the 20 point gain of two days ago.