Ranil sworn in as 8th President of Sri Lanka 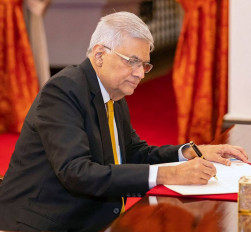 digital desk, Colombo. Ranil Wickremesinghe was on Thursday sworn in as the eighth President of Sri Lanka at the Parliament complex.

According to the Daily Mirror report, he took oath before Chief Justice Jayanta Jayasuriya.

Wickremesinghe, 73, got 134 votes from MPs in the Parliament elections held on Wednesday.

Of the 225 MPs, 223 voted in the ballot, four of which were invalid votes, while two MPs abstained from voting.

Soon after being elected as the President, Wickremesinghe invited all political parties to join hands with him and work together to overcome the economic crisis and bring about a new political change.

Kabul Drugs: What a man, what a woman… Here dogs have also become addicted to heroin, Kabul is badly caught in the trap of drugs, horrifying pictures