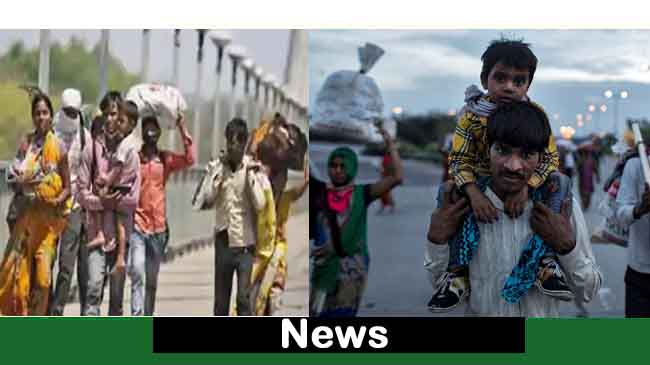 The third round of the Lockdown Depression is over. The manner in which Prime Minister Narendra Modi, in his address to the nation, focused on saving both life and the world, made it clear that the fourth phase of the Mahabandi was not implemented in the same way as the previous three phases.

Apparently, Kendra gave the states the right to open and close things according to their own. In Delhi, many things have come back on track whereas there is lockout in some places.
However, by coming to Lockdown-4, it is clear that the workers would stop and wait for the opportunity to go to their work. But the attitude the state governments and the administration under them have taken for these laborers, they have no confidence in the government machinery at least for now.
Of course, they have begun to see hope in that broken tile or hut of the village, which they left thousands of kilometers away just to feed and cover their bodies.

Workers rail is going on, but the workers are still forced to travel thousands of kilometers on foot. This condition of the laborers has proved that the industrialized states have failed to fulfill their responsibility and maintain confidence in themselves.

On 24 March, the Prime Minister, while announcing the great ban, had appealed to the employers and landlords of the laborers to not only pay their wages to the laborers during the detention, the landlords should not take rent also.

After the Prime Minister’s announcement, Delhi Chief Minister Arvind Kejriwal appealed to the workers not to leave Delhi and they would be provided food at their homes.

Now the situation is that the landlords are demanding rent from the laborers and threatening to vacate the house in case of non-payment. Similarly, some employers have given salary for one month, but have refused to give salary for the second month.

State governments like Kejriwal are claiming that they have provided ration to 72 lakh people. In such a situation, the question arises that when the ration is given to 72 lakh people, then why are the workers forced to return to their homes on foot at the cost of their own and their innocent lives?

Not only Kejriwal, every state government should ask itself where industrialization has taken place and whose important wheels of the economic vehicle have been these workers.

Labor constitution is placed in the concurrent list in the Indian Constitution. This means that in this case, the central and state governments can make their own laws and implement them.

In the event of a dispute, only a central law made by Parliament will be valid. Unfortunately, in the case of laborers, the governments of every industrialized state have failed. They were not able to provide rations to the laborers at their homes, could not pressurize their landlords not to pay rent and because of this they could not express their confidence in them.

Indeed, a trend is seen again and again in India. Whenever there is an effort to improve the bad system of states from the central government, every state starts citing the principle of federalism.

This trend is particularly visible in the states where the opposition party of the central government is in power. But when the situation starts to deteriorate, the same government instead of its state administrative system starts to seek the help of central machinery in the name of federalism.

The governments of Maharashtra and West Bengal are examples of this. There, when the cases of Corona and laborers started increasing, they began to strike central cooperation.

The three-tier structure of governance in India may be good in terms of democracy, sometimes it is very bad in terms of administration. If one vote does not have governments in the center and states and there is a majority of the opposition party in the unit of local self-government, then at all levels, there is obstruction.

Unfortunately, the same is seen in the cases of laborers. State governments are blaming the Center for this condition of laborers. But there is no serious effort on their part to improve or improve the condition of the workers.

Workers are running from everywhere, be it West Bengal, or Telangana or Andhra or Congress-ruled Chhattisgarh, Maharashtra or Punjab or BJP-ruled Karnataka.

The Kejriwal government of Delhi, which is changing the politics of the country, is accused that on one hand it directly talked about the interests of the workers, indirectly its workers spread a rumor among the workers that buses are going from Uttar Pradesh and they are going to the Delhi border. Take the exit from Uttar Pradesh.

Those who cover political parties know that their leaders have two forms. One, they talk very well on record in front of the camera. But off the record, the same leader takes out all the dirt of himself and his party.

From the very beginning, political parties have been of the opinion that on-the-record attitude towards the resolution of a problem, they are of the record or in reality the opposite.

In the era of social media, since most people are equipped with their ideological glasses, they do not try to see any problem in its entirety.

Therefore, they also blame the governments of Uttar Pradesh and Bihar for the problems of the workers. But the misfortune of both the states has been that since the nineteenth century they have been continuously exporting laborers.

In the second half of the nineteenth century, most of the workers who were taken under the agreement to places like Fiji, Guyana, Trinidad, Mauritius belonged to these two states. Bhojpuriisation of the same agreement became indentured and the laborers who went under it were called indentured laborers.

After independence, it was expected that the fortunes of these states would change and at least these states would not remain laborers. but that did not happen. Unfortunately, except Morarji Desai, PV Narasimha Rao, Deve Gowda and IK Gujral, the politicians who reached the highest prime ministerial post in the country’s politics remained from Uttar Pradesh.

But look at the misfortune that despite being so much, both the states remain the only exporters of laborers. The crisis of these two states is that even if all their migrants return to their homes, both these states can hardly provide work due to their huge population. Yes, due to the convenience provided by the Food Security Act, ration can be provided.

Reverse migration has also increased the risk of corona infection in rural areas. To stop this itself, a sudden mahabandi was announced. The central government accepted that its appeals would have an impact. She forgot that in the country where politics has entered the vein, which has been further increased by social media, there will be no politics at the cost of life of common people. The failures of the state governments are sometimes seen to be unsolicited, while at times they seem to be intentionally cloaked.

The exodus of workers along with political parties is also a failure of the bureaucracy. The problem of the Indian bureaucracy has once again come to the fore that it is not truly imaginative. She imagines being far from reality.

She fails to understand that the workers cannot trust the policies and promises made. It also failed to provide relief to the workers at the ground level. It was also his responsibility to support the workers at the grassroots level. There is no reason for the restrictions being imposed by the state administration in allowing the border to cross.

After all, whose landlords have evacuated the houses, who do not have even arrangements for food, after all, under what trust and under which umbrella will they be able to live. In such a situation, the administrative machinery should have taken a co-operative approach by making a coordinated policy.

But unfortunately this is happening. Due to this frustration and anger among the laborers, surely they will hold politics responsible instead of officers or administrative system. The boundaries of bureaucratic thinking have been repeatedly exposed.

Labor trains were run by the bureaucracy, but she forgot to arrange public transport to go to the respective station. Likewise, the bureaucracy did not think of making proper arrangements to bring the people who reached their destination home from the station.

This range of bureaucratic thinking has shown that it will have to do a lot of work at the level of imagination. A lesson in the labor crisis of the Corona era is also to move towards accountable bureaucracy.

The failure of political parties has proved on another front in this whole problem. It is believed that the central government and the Bharatiya Janata Party government have failed to stop the workers. But other political parties also could not stand to help them on the streets.

The only task of the bosses of the political parties is to keep sharing their knowledge and pain syrup on Twitter as their reactions.

Political parties have forgotten that a worker who is unable to trust their governments and their perceived welfare schemes does not watch and read the tweeter. He does not make his own ideas and his concept with Twitter.

The way Kabir says, I say eyes see, in the same way a laborer develops his concept and draws his opinion from his experiences. Therefore, political parties should now be alert. If the government and the BJP have failed, the workers also know that the opposition parties claiming to wipe its tears are also just airing.

In the coming days, when work will start in cities or industrial centers, then the same industrialized states will look for these laborers, which they did not take care of in the thick of time. Then they will have to turn to the streets of Bihar and Uttar Pradesh to have skilled, hard working and accountable hands to pursue their business.

When there is not enough money in the treasury of Delhi, Maharashtra or Karnataka through industrial production, then they will be reminded of the forced laborers today. Remember, those homeowners will also come to them when their houses are empty. The fear is that it should not be delayed till then.

To improve the condition of laborers in the country, it must be the first to have a centralized ration card. So that wherever they live, they can get ration. For this, they do not have to face their states.

In Article 1 of the Constitution of India, every person of India has been described as a citizen of the country. But seeing the problem of laborers, everyone felt that he is a citizen of his state, he is a migrant elsewhere. In other states, that person is less, outsider more citizen of India.

In the coming days, it will also be thought in this direction that how can the citizens of India get equal respect in the whole country. Now the industrial units should also be motivated to make arrangements for the people working in their homes in the coming days to protect themselves near their place of work. If this happens, in the days of future misfortune, the workers will not have to return to their homes at least in such inhuman conditions.