Infighting in Karnataka Congress: Kharge said – it is not right to stake claim on the post of CM 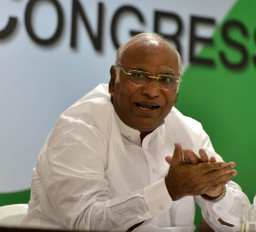 Digital Desk, Bangalore. Reacting to reports of infighting in the Karnataka Congress over the chief minister’s post, Leader of Opposition in Rajya Sabha Mallikarjun Kharge on Saturday said it was not right to discuss the chief ministerial candidate ahead of the 2023 assembly elections. The party high command will take the final decision on this.

Speaking to the media in Mysore, Kharge said, it is not right to claim for the chief minister’s post even before the upcoming assembly elections. Mysore, Bangalore or Kalaburagi will not decide who will be the Chief Minister? The party high command will decide on the matter. Leader of Opposition Siddaramaiah and Karnataka Congress President D.K. Shivakumar has staked claim for the chief minister’s post several times.

Both Siddaramaiah and Shivakumar’s supporters have been claiming that their leader will become the chief minister if Congress comes to power. This political development has exposed the infighting within the Congress and sources say it will get worse in the days to come, as elections are approaching. Less than 10 months are left for the assembly elections.

Along with Shivakumar and Siddaramaiah, a section of leaders within the Congress wants Mallikarjun Kharge to be the chief minister if the Congress wins a majority. He said, not like it was then or this time, the Congress will always go ahead with a collective leadership. We have to bring the party back to power, he said. This is our main objective.

When asked when he would return to state politics, Kharge said, “Let me see if everyone (Congress) decides to give me a chance.” Congress leaders are upbeat after an internal survey. Which shows that the party will come back to power in Karnataka with a comfortable majority.