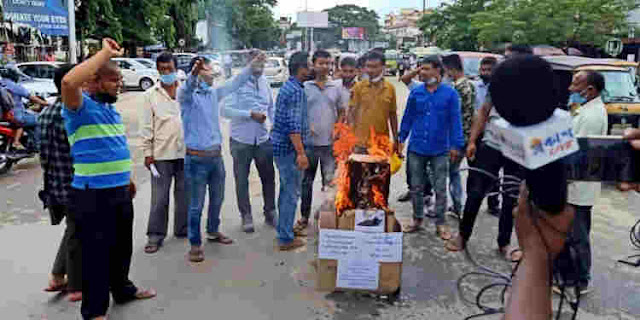 Farmers took to the streets of Jorhat on Saturday to stage protest against the three agricultural reform projects recently approved by the Parliament. Farmers and students burned copies of the three bills and the effigy of Prime Minister Narendra Modi under the banner of Krishak Mukti Sangram Samiti (KMSS) and the wing of his students the Satra Mukti Sangram Samiti front office complex deputy commissioner Jorhat .

The three essential products (Amendment) 2020, Product Farmers Trade and Industry (Promotion and Facilitation) Bill 2020 and farmers (Empowerment and Protection) price agreement Assurance and Services Farm Bill was approved by both chambers of the newly Parliament.

The KMSS and SMS members shouted slogans against the government led by Narendra Modi, calling it pro-corporate and anti-farmer, anti-people. Bhoirab Bora, president of the unit SMSS Jorhat district said that private players would have the advantage while buying products from farmers and had given them an open hand. Bora also said farmers would be at the mercy of corporate houses and be the losers.