Delhi BJP protests on the streets against Manish Sisodia, raises demand for dismissal 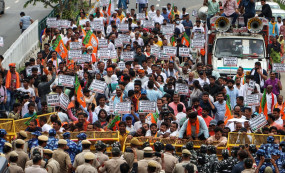 Digital Desk, New Delhi. BJP has opened a front against Delhi’s Deputy Chief Minister and Excise Minister Manish Sisodia. The BJP took to the streets on Saturday, although the Delhi Police has also detained many workers on the occasion.

The BJP and the Congress have become attackers against the Aam Aadmi Party since the recommendation of a CBI inquiry regarding the new excise policy of Delhi. However, other leaders including the CM of Aam Aadmi Party have denied the allegations against Sisodia. Hundreds of Delhi BJP workers protested outside Deputy CM Manish Sisodia’s house, led by State BJP President Adesh Gupta.

During the protest, he said, this protest will continue till he is sacked. Delhi government has done corruption in liquor policy. We are here on the road, what is the compulsion of Kejriwal who gives money to the liquor mafia without cabinet approval. These people are giving benefit of thousands of crores to the liquor mafia.