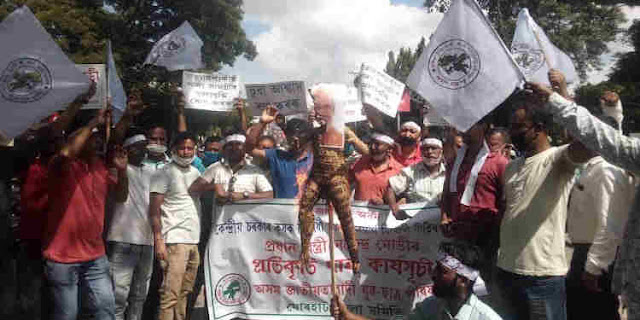 The AJYCP burned an effigy of Prime Minister Narendra Modi in Jorhat on Wednesday in protest at the reform of the Essential Commodities Act. During their protest, the Assam Jatiyatabadi Chatra Yuva Parishad (AJYCP) members carried banners and shouted slogans against the PM and the central government.
The AJYCP members demanded fair prices for produce farmers, declining commodity prices and the re-application of the minimum support price.

The president of the unit Jorhat district AJYCP, Pranab Jyoti Saikia and acting secretary Surya Kalita called for the scrapping of the amendment to the Commodities Act 1955. The essential act was passed by Parliament on 22 September and was linked to reform projects farmers. In this modification, the government eliminated cereals, pulses, oilseeds, edible oils, onions and potatoes from the list of necessities.